More on the Irish Confederate War

When I first decided to write my backstory to The Parting Glass, I had no idea that it would lead me down the path of 17th Century Irish conflict. Normally, war bores me – but this rebellion I find fascinating. Having had my DNA tested, I have 73% Irish ancestry. I knew I had Irish Catholic ancestry, but no idea just how Irish I was. And I would imagine that this rebellion would have had some sort of impact on my ancestors. You can see the timeline of events here.

I just started actually writing my version of The Parting Glass. I’ve named my protagonist – Pádraig McNamara. So I am two words in – his name – when I realise that I need to find out what weapons were used in the conflict. This is proving much harder than I expected. After quite a search, I came across Gun Timeline. I had no idea that guns were around so early! It appears that the matchlock gun was around in the 1640s. This picture, while of a gun in a museum in Vienna, is of a matchlock gun c.1640.

But I hadn’t envisaged Pádraig going down to a gun – so I kept looking.

I revisited one of the sites I regularly use and found the name of another weapon: a scian, which is a knife. Just had to find a picture of this. Found Bladesmith’s Forum.com and found a replica scian: I think Pádraig needs one of these! I see him as a person who would be ‘hands on’ in war.

And then I found it: the English Mortuary Hilted Backsword! What a name for a weapon! That had to be it! Found it, pictures and all, on the Antique Weapon Store website. 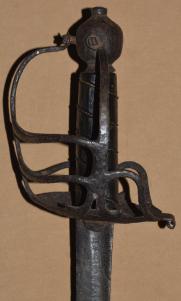 This is the weapon of choice for the dastardly Englishman who will attack my Pádraig! The full picture is up with the title. The Parting Glass is far too contemplative to use a gun: a noble sword it must be! Although the general settler would not probably have possessed one of these, I’m sure I get it into the hands of one somehow …..

A writer of historical fiction and paranormal stories.