The English Language – as we know it

I had the please of attending a concert the other night that traced the history of music over the last 2000 years. When the they sang a song in Middle English, I was reminded of the fact that the language in England has not always been one that most of us today understand. I resolved to look further into it.

Before the invasion by the Jutes, Angles and the Saxons, the people who lived in the land we now call England spoke a Celtic language. Upon the invasion, these people essentially went to the lands we now call Wales, Scotland and Ireland.

The three Germanic tribes that had pushed the Celtic speakers out, all spoke a similar language. A melding of these languages made what we refer to Old English, which was spoken until about 1100. Most speakers of Modern English would not understand this brand of English – although some of our words do have their roots in this early version. 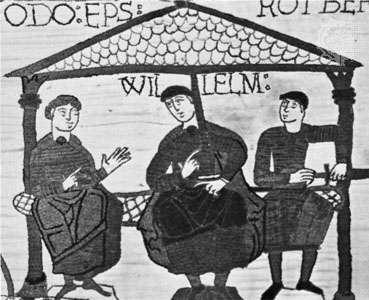 William I (centre), detail from the Bayeux Tapestry, 11th century; in the Musée de la Tapisserie, Bayeux, France. from https://www.britannica.com/biography/William-I-king-of-England

William the Conqueror brought more with him than invading forces in 1066AD. He bought the Norman version of French. It became the language spoken by royalty, businessmen the ruling classes (https://www.englishclub.com/history-of-english/). It lived side-by-side with the Old English of the peasantry, eventually evolving into what became known to us as Middle English when, “[i]n the 14th century [,] English became dominant in Britain again, but with many French words added” (https://www.englishclub.com/history-of-english/). It was, however, not the

An example of Middle English by Chaucer from https://www.englishclub.com/history-of-english/

English that we are familiar with. Here is an example from the words of Chaucer, who wrote in Middle English but around the time of The Great Vowel Shift. While some words are recognisable, many people would still struggle to read this fluently.

Which brings us to the Great Vowel Shift. This YouTube explains it very well. Essentially, through exposure to different languages, particularly the French of the period, the pronunciation of vowels was becoming shorter, changing the way words were said. This moved us into the Early Modern English language. This was the language of Shakespeare.

Hamlet’s famous “To be, or not to be” lines, written in Early Modern English by Shakespeare from https://www.englishclub.com/history-of-english/

Which leads us to English as we know it. “The main difference between Early Modern English and Late Modern English is vocabulary. Late Modern English has many more words, arising from two principal factors: firstly, the Industrial Revolution and technology created a need for new words; secondly, the British Empire at its height covered one quarter of the earth’s surface, and the English language adopted foreign words from many countries” (https://www.englishclub.com/history-of-english/).

The following are great sites with more information – including the one I have been using predominantly here, The English Club.

The English Club – History of English

What are the origins of the English Language?

The History of English

The History of English in 10 Minutes

A writer of historical fiction and paranormal stories.