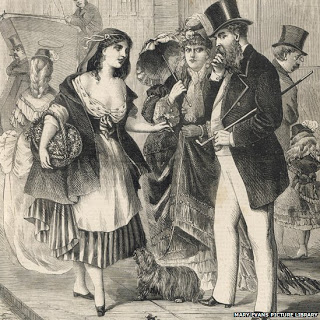 The time has come to again work on short stories for the next Authors’ Tale anthology, Ink Dreams. I have a paranormal ready to work on, but I needed to have a historical fiction. How could I not submit one of those.

So, I don’t want to let the cat totally out of the bag, but for a small portion of the story I needed to know about prostitutes in Victorian London. And I was so fascinated by the information I found that I wanted to share it with you all.

First article is 10 Fascinating Facts About Prostitution in the Victorian Era by Shannon Quinn. A few surprises for me in this one. Like, did you know that street walkers could actually earn more money that prostitutes that worked out of brothels – and they could also choose their clients? And that there were several ‘form guides’ published in London and the papers so that men could choose a prostitute before they headed down to London? This article is definitely worth a read.

A more academic offering, Prostitution in the Victorian Era (1830 – 1901), confirms much of what Shannon Quinn asserts. I would love to give more credit for this article, but ‘soulblur’ is all I have. What I do find surprising is the consistently high numbers given when talking about how many prostitutes were in London. ‘soulblur’ cites Judith Walkowitz from John Hopkins University when giving the figure of 55,000 prostitutes. But I have seen numbers of up to 80,000 given.

I discovered an interesting twist in the article, Prostitution by Judith Flanders, on the British Library site. She suggests that we can never really know the number of women who were earning their living in the way we think of as prostitution today, due to the fact that women who were living with a man and not married were also know as prostitutes, as were the mothers of illegitimate children – and women who had sex with men simply because they enjoyed it. Flanders also raises the valid point that identification of a prostitute was not always easy and many respectable women were wrongly approached.

Here are some other blogs and articles you might find interesting on the topic:

Anyway – back to the story. Enjoy the links.